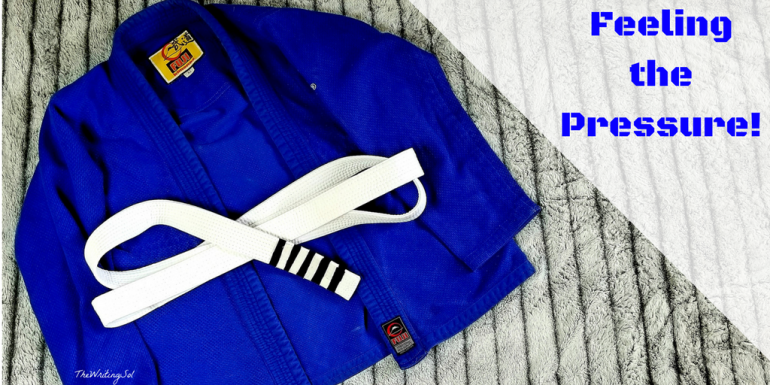 I have some exciting news, and if you can’t tell by the picture, I am now a four stripe white belt in Brazilian Jiu Jitsu! This was a bit expected because I was passed over for a stripe at the last promotion, and I’ve been putting in work!

It was nice being recognized for that work and seeing it manifested in the form of the fourth and final stripe at the white belt level. My new goal now is to get that blue belt at the December promotion ceremony.

Given the above, I want to discuss a, perhaps, unexpected consequence of the two: performance pressure.

Let’s be real, no one expects anything from a white belt. You show up. You get tapped, and then you get tapped again for good measure. Even when you start getting stripes, expectations are mostly non-existent.

If you are unfamiliar with the belt structure of BJJ, the introductory belt is white, then blue, purple, brown, black, and (if you are a jiu jitsu god) red. In order to be promoted to the next belt, one accrues a total of four stripes in the interim. Overall, it takes approximately ten years to obtain your black belt.

Back to performance pressure. As a blue belt, it is expected that you know a thing or two. You may not necessarily be “dangerous,” but you know what’s up. You’ve developed a game.

I have yet to develop that “game,” and there are still some serious holes in my technique. I need to strengthen my bottom game, especially open guard, as well as diversify my attacks from mount and side control.

Given the six month time frame, I am extremely nervous about the rate of development of my training. I feel like it’s crunch time, and like I need to be in the gym double time tapping people. Frankly, I’ve only consistently tapped like four different people at the gym.

As a female Brazilian Jiu Jitsu practitioner, I’m also nervous about the technicality of my game, especially when challenged by an opponent who is significantly stronger than I am. It is true that you don’t need to be strong in order to win in jiu jitsu, but it can help. Therefore having superior technique, especially for a smaller person, is of the utmost importance.

In knowing myself, I am fully aware that if I, as a blue belt, were to get out muscled by a white belt guy, I would be disappointed in myself. This may sound ridiculous and like I am being too hard on myself, but the pressure of it is very present for me.

Also, many fresh blue belts tend to be targeted by three or four stripe white belts. The higher level white belts are looking to test their skills and even get a tap out on a higher belt. It’s nothing personal. We’re all trying to do the same thing, but a new blue belt who already feels like maybe they weren’t ready for this promotion, definitely feels the pressure to perform.

However, instead of drowning in the pressure, I am going to utilize it to motivate myself in upping my game. As I am still a white belt, and no one expects too much from me, I will be using this time to truly challenge myself on the mat by rolling against bigger opponents and trying new techniques.

Do you practice BJJ? Can you relate to feeling any sort of pressure to perform on the mat?